All the best laid plans…

After a drizzly start, the weather cleared and the day got brighter as the afternoon went on.

Graham, the rostered OD, passed the baton on to William so that he could sail the whole weekend championship series. However, with a couple of mishaps along the way in each race it wasn’t to be his best day’s racing. A good second place was lost when there was a spinnaker malfunction when taking it down at mark 2. The next race he had a poor start which he was unable to recover from.

Simon/Jon were a little too eager at the start of the first race and opted to return even before a signal was sounded. They were also part of what seemed as if it was to be a three way protest when a bank of F15s looked set for a collision course with other fleets. Although Steve and AJ didn’t finalise their protest, Val has submitted one which will be heard on Sunday.

Mike, who was going to assist William (did he forget?), took advantage of the better weather to get back at the tiller of his Laser. However, due to some necessary adjustment of his clew tie down, he started several minutes after son Josh whose start was six mins after Mike’s scheduled start! Peter W went astray when he missed out a mark of the course and retired.

Although it was not too windy, there were a few capsizes to keep the rescue crews awake.

The overnight leaders are Neil/Nick in the F15s, Steve/Ruth in the fast handicap, and Jim in the slow handicap, each with two 1sts, The position in the GPs is much closer with John and Mike/Eric each with four points.

Sunday was windy (you know it’s windy when you can see the tops of the waves looking downwind!), but there was still a good contingent that took to the water. Ian’s race didn’t start off well when his start was delayed trying to sort his furling gear. He made up the 90 secs delay only to forget that he needed to take down his spinnaker at the end of the first run…. Ethan was out with Izzie in the RS200 again, practising capsizing techniques, as was Hugh in his Vareo. 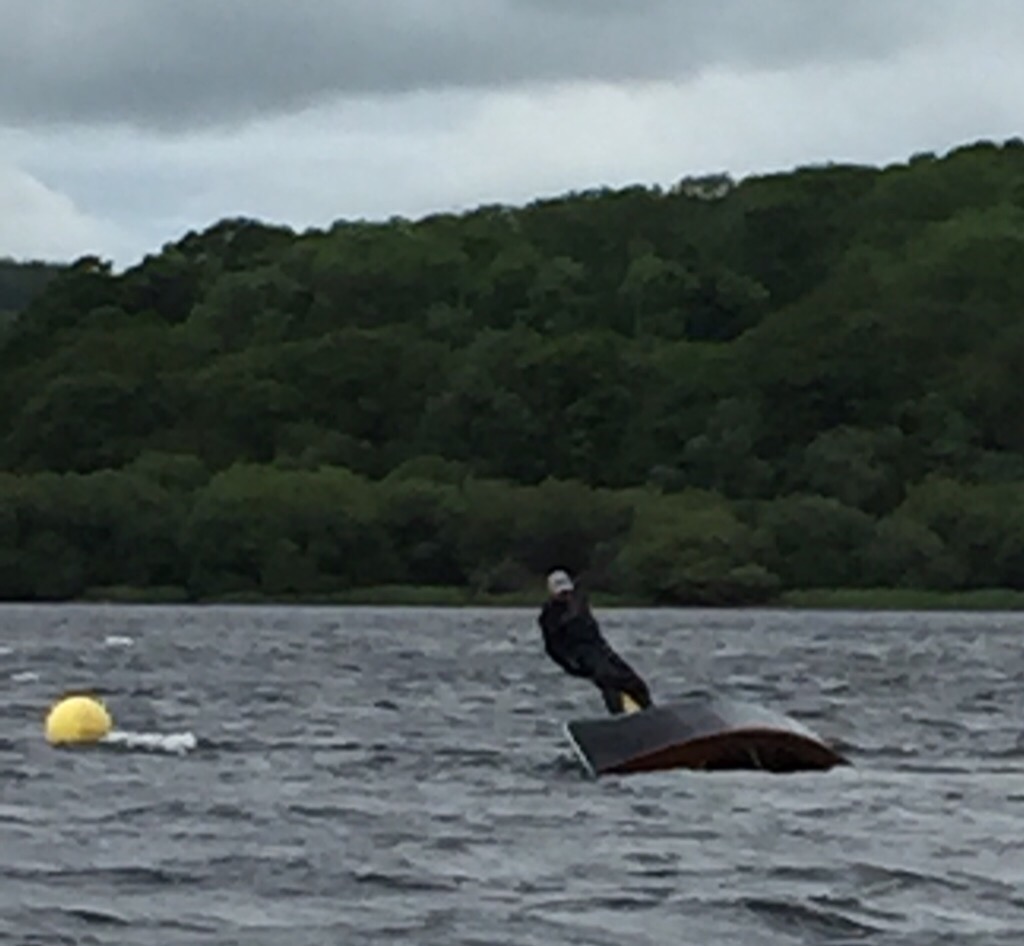 Val/Ken were caught out at the gybe mark, and Ken seemed to be resting on the centreboard while Val swam around a bit… The F15s didn’t capsize, but a couple were flattened in some of the gusts. Jim/Poppy didn’t have any competition in the slow handicap fleet so raced with the bigger boys and, as they didn’t capsize, managed to beat Hugh over the finish line.  The stand in OD’s plan to have two races before lunch was snookered when finishers just headed straight for the shore after finishing (they usually ask what’s planned!).

After lunch the wind seemed to have abated a little, but there were more capsizes, and a feast of protests, interestingly between the same F15s. Decisions as to whether to fly spinnakers proved to be key, especially if they didn’t fill quickly after hoisting, as places were quickly gained or lost depending on whether it was done well. The heavy conditions started to take its toll on the fleet, and only six boats started the final race of the series, of which the two GPs opted to retire at the end of the first beat. Neil/Rory misjudged the start sequence and didn’t notice the rest of the fleet had started for well over 30 secs! Mike/Kayla had taken an early lead, with Simon on his tail. Another lap on, and AJ retired leaving just three F15s to fight it out. The finish proved to be very close with only about a boat length between each boat. Simon finished 1st, with Neil 2nd but Neil touched the mark and rerounded, losing a place to Mike in the process.

After racing a couple of the protests were heard, resulting in Simon being disqualified from race 4. As time was getting on, and various people were going out for dinner, the third protest remains in abeyance to be heard at a later date. (Hopefully no-one noticed one of the protesters, and one of the protest committee, dining at the same venue on Sunday evening!)

Numerous sailors were wilting before the end of the day, and are certain to sleep well tonight.

The overall winners for the weekend were Jim in the Slow handicap, Mike/Eric in the GPs, Steve/Ruth in the Fast handicap, and Neil/Nick/Rory in the F15s (subject to protest).