After the NSSA, and Bass Week, and the Triathlon we were able to celebrate having the club to ourselves again (well for one day, as we have the RS Vareo Nationals over the bank holiday weekend).

With heavy overnight rain, gusting winds, and a lot of apathy at the sight of the tops of the breaking waves, the prospect of getting anybody to take to the water seemed low despite AJ merrily rigging his newly acquired GP.

By the time the Bates was brought ashore, made easier when it was released from the mooring, there were several boats ready to take to the water.

A last minute rush by Scumper (nothing new there!), meant he was rigging his gennaker afloat, and only reached the start line with 10 secs to go, uncertain whether the gennaker would fly when needed. To his surprise, it did, but it took him a while to make up some lost ground and pass Tog and Banter, and eventually win. The various gusts/squalls that passed through led to numerous capsizes across the whole of the asymmetric fleet.

In the non-asymmetric fleet, Steve/Ruth led but retired on the final lap, and Mike/Kayla went on to win ahead of Val/Ken who had found they were sailing ‘on the edge’ in some of the gusts after rounding the windward mark. After some indecisive rocking, not certain whether to put the spinnaker up or climb on to the centreboard, they did escape a capsize put flew the kite without a pole until the conditions eased.

The wind picked up 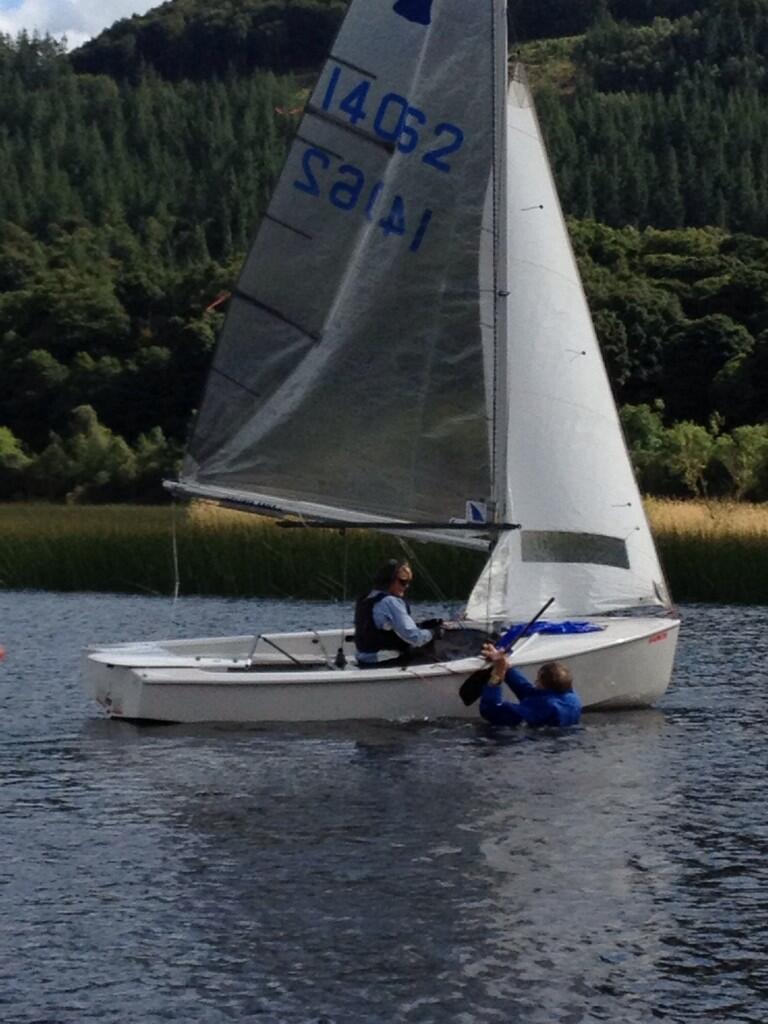 as the race ended, and seemed to drop a little as the 2nd race started! Banter sailed a blinder of a race, keeping Scumper at bay until the last lap, and only dropping back at the last minute when a gust had him wondering how to avoid kebabing Herb!

The tail enders of each fleet seemed to be having a competition on the number of capsizes they could survive, but both Ethan and Alastair persevered to finish.

AJ is still being cautious to avoid running aground with his fixed rudder, but it seemed to involve a lot of swimming and numerous helpers to get his boat ashore. Practice makes perfect…