Congratulations to Stephen Kirkpatrick and Claire Thomas who were married recently and celebrated with family, friends and numerous club members. 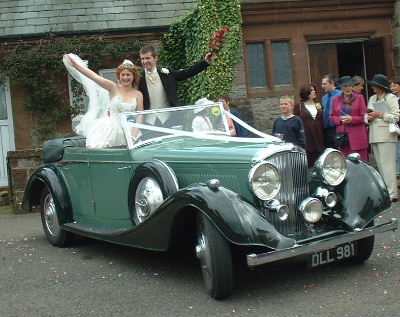 On Sunday, the Bass Burgee and Flying Enterprise Trophy were sailed for in a sunny day with fresh winds. Typically, the OD sent the fleet around the lake and, with a South Westerly wind passing over Sale Fell, the course was to prove as challenging as ever.

On the first beat Philip Smith and Toggle Cowan in their GP took dislike to a tack by William Carruthers and Alan Smith in a Flying 15 and allowed it to mar the rest of their race. Mark Somerville went for an early swim on the first offwind leg. As the boats headed for Scarness the effects of the winds tumbling over Sale Fell started to take effect. The downdraughts caused 180 degree shifts, calm patches, boats beating away from others on a spinnaker run (and travelling in the same direction!). The pack stayed relatively close until the fleet started to round mark 14 under the lee of the Fell. Neil and Judith Currie turned turtle following a massive windshift in this area. However, William Carruthers was first into the main windstream and began to leave the fleet behind. Mike Moore and Ian Smith followed in their 15, with Hugh Godfrey and Rhonwen Bryce in a GP not far behind by the time the fleet reached the end of the lake.

The return up the lake was no easier, but William held off Mike until the finish. The GPs had a good race with John Telford and Andy Smith taking the lead from Hugh Godfrey.