As if by magic, the sailing season is underway for the 63rd season.

Recent weather, and a poor forecast didn’t deter a dozen boats from taking to the water in, what turned out to be, good sailing conditions for the Starter’s Prize.

In the morning race Robbie D/Banter took the lead in a RS400, while Andy/Ginger Phil raced the new Gingerboat GP, eventually ‘released the handbrake’ (as Andy put it) and pulled out a strong lead from the other GPs. Bean/Naomi were back on the water in their RS200, and, not unexpectedly, were always in the frame but finished 2nd on handicap to Robbie D by just 12 secs.

Scumper/Tog were in a RS400 for the day, and led the afternoon race. Robbie D was close on their tail at the windward mark and promptly capsized after slipping while launching the gennaker. It was to be Andy that would win the race on handicap followed by Mike/Eric and Joan/Jack in another two GPs, and Bean/Naomi came 4th which earned them 2nd overall behind winners Andy/Phil 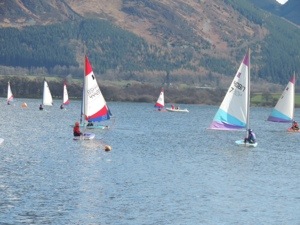 This weekend also saw 17 young children taking part in organised training led by the RYA coach Dave Eccles. The children’s aims were to have as many races as they could in the two days, and learn how to sail faster. With snow on the fells around Bassenthwaite and the occasional gusty sleet and hail shower passing by, the kids had to wrap up as warm as possible. Despite not wanting to get wet, some ended up taking unseasonal dips in the ice cold water. 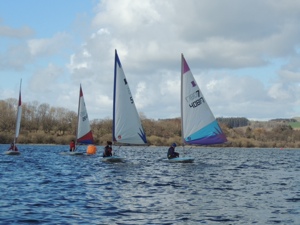 With many of the early races were being won by the trio of Jamie Kerr, Jenny Dunn and Hazel Newport, Dave Eccles was soon having to bring in a handicap system, by making the leaders do 360 degree turns, so the rest could keep up. After several dozen single lap races and a few suggestions to each person on how to sail faster the older members watching from the warmth of the clubhouse could see quite an improvement.

The children will have a few more weekends of race coaching before Easter, when the next intake of beginners will start learning to sail, and last years intake of students have to start sailing alongside the old hands.

Bassenthwaite Sailing Club is now recruiting new members and is offering introductory training to racing level in the first year.