The first bank holiday of the season started with sunshine but little prospect of wind for the inaugural Good Friday pursuit. However just 45 mins before the scheduled start a sea breeze quickly filled the lake so the racing could get underway on time (well almost as Herb declared that proceedings would be held up until the Lady Commodore was at the startline).

Sailing Sec Jon and sister Judith in a F15 got the best start of all throughout the 30 min sequence. By the time Robbie D/Banter started in their RS400 the wind strength had started to ease making their pursuit a bit harder.

Mik led the fleet in his Mirror initially but was passed by one of the Toppers from the Youth squad, and then Dave/Lynn took the lead. As the wind faded even more Dave’s lead proved to be unassailable though Robbie D closed the gap considerably to finish 2nd with Mike/Eric 3rd, and Mark/Naomi 4th. Graham/Elaine led the F15s finishing 5th

The evening entertainment comprised a wine tasting quiz, so there could be a few sore heads in the morning.

Another beautiful day for Easter Saturday started with a light SE breeze. However, by lunchtime, the wind had started to swing and it continued to swing to the NW by the time racing got underway.

There was an excellent turnout of 33 boats.

After another starry, cold, night Sunday has started sunny with a very light wind (nothing like the forecast).

As if by magic, the wind swung round to the forecast NE direction (so much for Simon’s prediction!) and continued to freshen. Although Shunty was over the line, because he didn’t return, and the flag remained up, Bean’s conscience got the better of him and he put his gennaker up to return back to the line (shame he hadn’t been OCS in the first place!)

With the wind freshening, and many capsizes, plus a few gear failures, the entry for the 2nd race was just the F15 and handicap fleet. However, the wind eased considerably to an extent that the spinnakers would not fill at one stage.

Winds shifts at mark 3 were the cause of many a change of position, and much frustration!

After lunch, with the less ferocious gusts having passed by, all four fleets raced again. The handicap fleet caused the first general recall of the season, together with much confusion as very few sailors seemed to know the procedure.

Towards the end of the race the winds again strengthened resulting in more capsizes, and retirements, including the whole of the Topper/Topaz fleet. One of the fallouts (so to speak) of the capsizing was the OD’s wife who took to the water with Alastair in a RS400, and had to put out a call for help in the shape of a 34F!

The early evening entertainment starts with the annual Egg Dump. Claire, that ringer from Newcastle came across especially with the intention of winning the Egg Dump, and despite being up against 6yr old Amber in the final, she attained her goal after a mere 40 odd years! This was followed by a belated St Patrick’s Day celebration with some special guests… 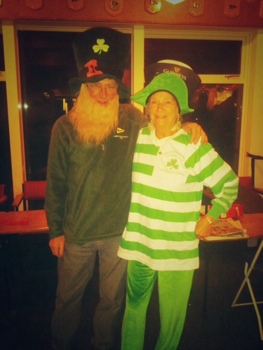 After windy evening, sailors were probably surprised to wake to another sunny morning with light winds. Perhaps the storm had blown through? The bank holiday forecast remained the same – strong gusts from the E. Similar to Sunday, the wind did fill in after 10am and continued to freshen. Although a few prepared their boats to launch, but changed their minds as the white horses appeared, there was a good turnout that enjoyed some spectacular reaches and often spectacular capsizes.

Ian/Lezli-Ann were spotted carefully folding their spinnaker in the clubhouse so that it was easier to rig on the boat. When launched, it so happened that the folding hadn’t helped as one of the clews was attached to the halyard…

After lunch there was little enthusiasm to risk any boat damage in the higher gusts so racing was cancelled and the campers had a leisurely end to their fantastic weekend.

The Great North Asymmetric Challenge is being held at the club next weekend. First race 1pm