Posted on 27 January, 2015 by Webmaster Posted in Socials

Views were unanimous. This was the best Members’ social event at the Clubhouse for quite a while. Claire, Lucy and Kirstie had pulled out all the stops. There were immaculate tartan table covers and serviettes plus a wee dram of whisky at each place setting. In the absence of a piper, Alistair was in charge of downloading the themed music.

And then the guests arrived with some suitably attired for the occasion. Pauline wore, arguably, the most chic Scottish outfit while Graham had, without doubt, the most flamboyant national dress – to which Judith commented that he wasn’t with her!

Proceedings started with Mark summoning all to the tables before AJ, complete with kilt, recited an Ode to the Haggis ending in the ritual stabbing! This was accompanied by Alistair’s bagpipes and the downing of the dram! The three chefs then served all with the main course featuring the haggis and, despite generous portions, there was another helping for all who fancied one. Next came a fruit pudding with whisky laced cream for those who dared. And, finally, a gigantic cheeseboard with six varieties of cheese was placed on each table.

Some abandoned this final offering and took to the dance floor to make the most of the music which, by then, seemed to have moved into an Irish theme! Others just relaxed and chatted at their tables and nearly three hours had passed before some made the move for home.

Who needs a sailing season when we can have pre season events like this one? 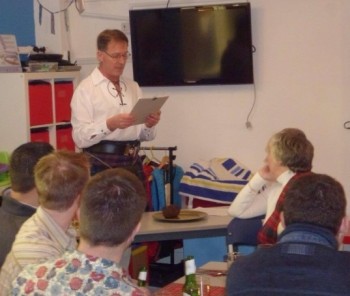 The great chieftain o the pudding race is addressed by AJ. Probably the only time a Haggis has been addressed by a kilt wearing Sassenach wearing gold coloured Budgie Smugglers under his kilt 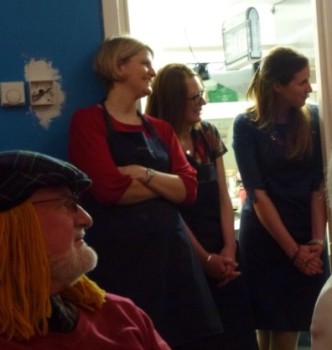 These galley slaves briefly deserted their post trying to have a peek at the Budgie Smugglers, obviously they had been given information about what Alan was wearing under the kilt. 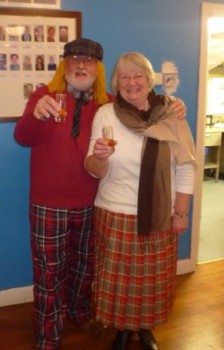 The MacPatricks were there too!