Posted on 16 December, 2012 by webmaster Posted in Socials 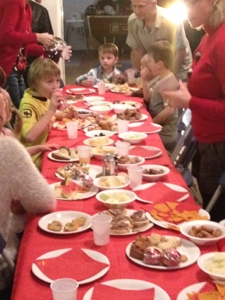 After some face painting, and numerous games to try and zap their energy (or perhaps Emma’s!), the kids enjoyed some nibbles. Then Henry announced that he had spotted Santa coming in on the water who had landed in Dubwath bay and hitched a lift from a rescue boat.

Santa then popped into the club, encouraged the merry throng to sing some Christmas songs, before handing out some selection boxes, and rushing off to his next appointment.