…Old habits that is! Roy was glad to be back at the helm again with Kirsty crewing. It’s a shame he wasn’t au fait with the start times of the pursuit race as he, and several other RS400s, seemed to be oblivious to the fact that they should be starting, which made William and Jonathan very nervous as to whether they had in fact started too early! Over the course of the 70 min pursuit, it was the final 5 mins where several places changed – must have been some good handicapping!

As for the second race, Roy was again someway behind the rest of the fleet at the start and he topped it off with a capsize on the gybe mark, and finally tried to run Kirsty over when coming ashore (she’d managed to keep her hair dry until then!) 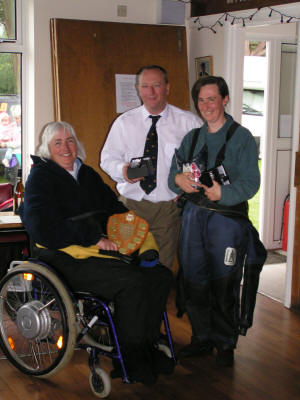 Of course the main sailing of the weekend is the Martin 16 National Championships, being sailed at Bass for the first time. Commodore Steve Hunt, as OD for the weekend, managed to get in the first 4 races of the 8 race championship. Clearly there is some close competition between the leading boats. The morning races were held in very windy conditions, and one hardy sole raised their spinnaker, but quickly dropped it again. Fortunately the design of the boat is such that the risk of capsize is minimal (I think!)Sunday morning started with what seemed like a nice southerly, but it never quite had the oomphh(?) that the sailors would have appreciated. The Martins continued to have some very close racing, and with just one discard tensions were high leading to a protest!

The delay caused by the Martin 16’s protest proved to be quite fortuitous as there was not a lot of wind, so after the prize giving the boats took to the water for the Jimmy Lancaster Memorial pennant as the breeze seemed to have filled in from the SW. By the time the race started the wind had faded, and a course set for marks 12 and 13 proved too much for William (though Cristina thought she’d missed the opportunity of a trip around the lake!) and he headed straight for shore. Most of the others persevered, but it was to be another 25 mins before the breeze came back, but this time from the South. With a bit of forward thinking, Shunty had included 10 in the course, and that was to be where he shortened the course after 45 mins.

When the fleet handicaps were calculated, it was Hugh and Rhonwen that proved to be the overall winners.