Posted on 30 March, 2013 by webmaster Posted in Racing 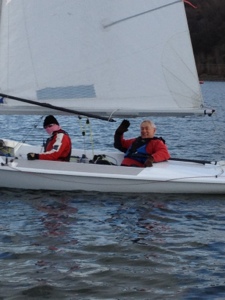 Mike and a well wrapped up Kayla

A freezing night left ice on the lake on Saturday morning, but the sun shone, so there was no need for any ice breakers before the influx of visitors attending our open day! Many visitors had the opportunity to go for a sail and experience a taste of our sport.

Commodore Andy Smith wanted racing to get underway on time. Although Herb was ready, the Bates wasn’t. No start marks, so had to pick them up only to find they had no flags! With everything ready for the on time start, there were still a few stragglers on the shore…

Steve/Ruth were ready though and they got off to a flying start – had they written the course down correctly though? Well they did go on to win the race, and the Starter’s Prize.

There were several light spots in the wind strength, but it was an easy start for the first race.

With a break for a warming cup of tea, sailors ventured out just before the sun dipped below the skyline, and they were appreciative of their extra layers and warming head gear. The wind eased as the race continued. Steve/Ruth again won the handicap race, with Mike/Kayla winning in the F15s.

Another cold night is in store for the campers, but they won’t have to endure the cold for quite so long as the clocks go forward by one hour tonight – don’t forget otherwise you’ll be an hour late for tomorrow morning’s race!