Posted on 20 September, 2014 by Webmaster Posted in News, Racing

Another bright, dry, but cooler day. Full of the joys, Mik started Bart’s Bash early with a gate start while the entrance gate was still closed! Consequently, the sliding gate is out of order and you will need to use the current gate code to release the combination lock that secures the temporary chain and gate.

Please contact us if you need to know the code for visiting the club at non racing times.

Racing wise, there was a light breeze from the ENE. Neil/Judith took an early lead in the F15s but the conditions were more suited to Ian/Lezli-Ann who broke through to the front and held it till the finish. They performed well in the 2nd race too, taking the lead, and building on it, until they were caught out by light airs around 3 when Neil got past.However, Neil rounded the penultimate mark the wrong way, only realising as Ian rounded it correctly, took the lead again, won the race, and secured the series!

Sunday started off with cloudless blue skies, the turbines at Bothel were turning, and there was a light breeze on the lake, but would it hold? With an earlier than usual start, and a forecast for the wind to fade, we were keen to get boats on the water and racing underway for the Bart’s Bash world record. 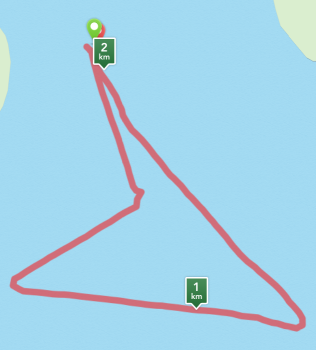 As the race formed part of a worldwide record attempt across 650 countries with 14000 competing boats it was important that we recorded the length of the course, the number of boats competing, the distance travelled and the time taken, and have it all independently verified,

As often occurs, the wind eased just after the start sequence, but the OD allowed the race to continue due to the expectation of nothing better to replace it. However, the wind did fill in quickly after turning through more than 90degs! Fortunately, one of the legs accommodated this shift which meant there was still a beat within the course.

With 36 starters racing from Youths to Grand Masters, and Rookies to past National Champions, there was a great mix of talent and experience sailing boats from Mirrors through to RS 400s.

Although our results are now live on the Bart’s Bash website there are a couple of timing errors that need corrected . On normal PY basis, our race was won by Phil/Naomi Smith in their RS200, just 5 secs ahead of Dave/Lynn Lawson. The top 6 boats within 30 secs of each other!

As planned, there was a BBQ over lunch, and the weather couldn’t have been better. Overall we are pleased to be able donate £325 towards the Bart’s Bash charity in addition to £110 of separate donations that have been made directly by competitors.

On such a pleasant day several sailors were keen for another race, the final one in the MJM/Asymmetric Challenge series. The wind direction seemed to be from the North, but it did shift, and fade at one point, but it was another race, and those that persevered were glad to be on the water.

Not sailing the final race meant that Dave/Lynn would be ousted from pole position as they did not have enough qualifying results, but Mike/Kayla, despite not racing had a good discard which ensured they could not be beaten in the MJM Series. No takers in the Asymmetric Challenge so Tog wins that trophy.