Posted on 18 October, 2014 by Webmaster Posted in Opens

Our Flying 15 team racing, Osprey & 505 Open is being held this weekend, however the weather forecast of strong winds proved to be accurate and put many off travelling. Even those that did turn up were surprisingly reluctant to rig their boats.

Though windy with heavy squalls passing through, conditions were sailable and thirteen F15s rigged and set off for the start. Unfortunately only twelve boats made it to the start as one boat lost its mast on the way out! Soon after a clean start another squall passed through and a couple of boats were temporarily flattened. There were several changes of position as some coped with the gusts better than others, but the carnage continued with two ripped mains and another broken mast (perhaps one dive exercise too many!?). It was wonderful for them to be told after the event – ‘you shouldn’t have done it like that!’

For the second race there were only seven starters. Simon Longstaff/Jon Denwood had the 2nd best start compared to John Somerville/Keith Thomas, but pulled out an early lead. A gust of wind at the gybe mark flattened their boat, Simon fell/was washed out, and their race was over. Unusually Mike/Kayla showed all their bottom with one gust, and subsequently retired when their gooseneck broke.

Mark Ninnim/Ian Preston practiced a Chinese gybe but continued on their way, and enjoyed moving up the fleet again as boats dropped out!

Despite all the mishaps, sailors were keen to have another race, though they later changed their minds after warming up in the clubhouse with a nice brew!

The Bass micro climate didn’t beat the forecast, and the winds didn’t ease, so racing was abandoned, and an early prize giving held. 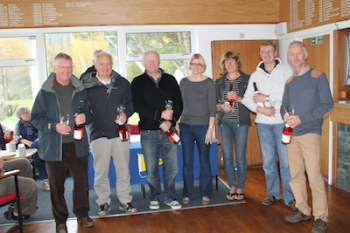 The winning Derwent Reservoir team – ‘We Must be Mad!’

There can’t be many events where a boat that gets demasted even before it gets to the start line is in the prize list, but Rod Huddleston/Alan Baker did just that as part of the second Derwent team ‘The Lads and One Lass’

One of the traditions of the team racing is to re-award the Grotty Potty. Last year it was won by Simon Longstaff, and although he was a worthy contender again this year, having done a ‘Tom Daley’ yesterday, he couldn’t and wouldn’t nominate himself, so he considered Dave Gebhard’s antics, including his swimming, but mainly for being down the creek without a paddle – boats taking shelter between races opted to venture into the mouth of the Ouse where it was shaded from the blasts of wind. No Dave didn’t try to sail under Ouse bridge but, unfortunately, he misjudged the shallow waters and went aground. At least he can look forward to nominating someone for their embarrassing actions at next year’s event!