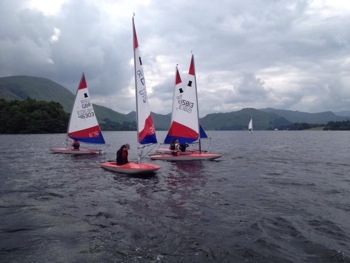 While the Solway Firth coastline was basking in the sun, the weather at the club was cloudy but warm.

Three of the youth squad had gone to an open at Ullswater. Jenny Dunn performed best finishing a creditable 22nd in a fleet of 29 boats which included National Youth Squad sailors.

The weekend racing comprises a series of five races scheduled to be run on a personal handicap pursuit basis, but a computer hiccup, and too many people giving JD earache, the format reverted to mass start with adjusted finish times. With such a light wind being forecast it was a little surprising that there was actually enough wind to race. OD Ethan took some ribbing from the stalwarts in the committee boat, but successfully got both races completed.

The wind did ease at times, and there was no sea breeze despite the sunny coastline, so it was very much a case of being in the right place at the right time. In the first race Mike/Kayla were in the wrong place when the wind eased and the course was shortened as they had to sail an extra lap in lighter airs. Ian won in his Solo, with AJ/Sue in a GP 2nd despite a pitiful start (or was he too much of a gentleman?), and Joan/Jack 3rd.

Pam was in the right place on the startline in the 2nd race getting the best start of all the fleet, and she went on to win the race on handicap. The patchy wind on the first beat led to some different lead boats with Anthony/Jeff taking the lead in their RS200 though they finished 6th on handicap. Ian secured 2nd, and is overnight leader, with Joan/Jack taking another 3rd.

In the absence of paid rescue crews at least we had one willing volunteer…. 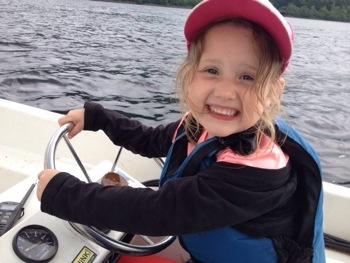 Sailors for day 2 of the Fleet Challenge B were met with a bit more wind than the forecast of 1mph. Stand in Race Officer Mike Cowan set a figure of eight course with a beat from A to 2. The majority of the fleet were keen to start at the starboard end which resulted in a general recall as most were over the line. They all got away at the second attempt and Robin Dawson with daughter Amber in a RS 200 led the fleet home followed by the flying fifteens of Mike/Kayla and Graham/Elaine. After personal handicaps were taken into account Alan/Sue in their GP14 won the race followed by Paul and Vicki Bowmer also in a GP14.

The OD decided a lunch break was in order and most thought the possibility of two more races was unlikely. However the wind remained and even strengthened for the final race. Robin decided to take the RS 400 out with son Ethan to celebrate Fathers Day and won both races on the water. Alan/Sue won the second race of the day on handicap followed by Ian Hall in his Solo. This left the series wide open with Alan/Sue, Ian and the Hardies all in with a chance of victory.

Joan and Jack Hardie sailed an excellent final race and won on handicap but the 5th place of Alan and Sue was enough to clinch the series by one point from Ian with Joan and Jack a further point back.