We are hosting this prestigious event on Saturday and Sunday of the August weekend. It was great to have a total of 35 entries.

With a forecast of next to no wind on Sunday, the OD forewarned sailors that he would try to get four races in on Saturday. A slight delay before the first race, but it got underway in a nice breeze and promptly faded for 5 mins! As ever, the cream rise to the top with Steve Goacher taking the lead and winning the first race.

All were a bit too eager for the second race so there was a general recall. After a second general recall, the black flag came into force, and everyone behaved well getting the race underway in strengthening, but still shifting, winds. Another win for Goacher.

However he didn’t have all his own way in race 3, being 10th to windward mark, working through to 5th off wind, and clinching water,and 1st position at the leeward mark before the final leg of the shortened course.

Goacher took the lead in the fourth race from the windward mark and continued to pull away. With potentially one final race on Sunday Goacher had already won the championship.

As for everyone else, there was mixed fortunes with many ups and downs, various bumps and near misses, several threats of protests, and many weary sailors after a challenging days sailing.

They were all ready for the Waples wine tasting together with a slither of cheese, and it turned out to be a boisterous, fun evening.

Sunday was a beautiful day with a poor wind forecast. After a postponement, despite major wind swings the OD was able to get a final race underway. The wind continued to swing, and eased from time to time, but it was another race for Goacher to demonstrate his ability to work through to the front of the fleet and secure his fifth win of the championship – a clean sweep! 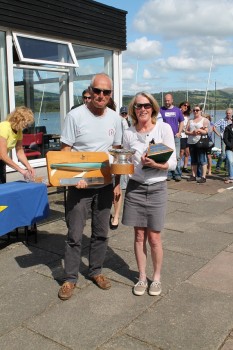