A goodly contingent of 8 boats from Derwent Reservoir and a lone adventurer from Scotland travelled to Bass SC to take part in the annual team racing event on the weekend of 20th October. Together the nine visiting boats provided three teams set to challenge the two teams from the home club. With Steve Goacher due to arrive on the Sunday it was agreed that the team lying in last position overnight would reap the benefit of having Steve as an addition to their team on day two.

The overnight forecast was amended on Saturday morning to suggest that the projected 12 mph breeze was not going to materialise – nor did it. The fleet launched in pleasant sunshine and a gentle F2. The conditions, however, were not as benign as the casual observer might have been led to believe. The wind strength was extremely variable over the race course, with bands of pressure favouring some and heaping ordure on others.

The early leaders of the first race, Neil Platt and Phil Davenport from the home club, headed the fleet for most of the first lap, only to end up in 9th place. Terry Crumpton and John Mathie from DRSC were consistently in the leading vanguard and managed, eventually, to find their way to the front and take the gun. Simon Longstaff and Jon Denwood from Bass found a few more ladders than snakes and sailed well to finish second, with John Hardisty and Dave Christie from DRSC also improving through the race to finish third.

The second race was sailed in a gradually fading breeze. Terry Crumpton and John Mathie showed great consistency in the testing conditions taking the gun for a second time. Former FF hot shots Neil Currie and Rory Yardley, who have recently returned to the class, recovered from their eigth place in Race 1 to take second, with Dave Douglass and Steve Turley from DRSC improving to third.

Terry Crumpton and John Mathie were overnight leaders from Simon Longstaff and and Jon Denwood with Dave Douglas and Steve Turley in third. This meant that the ‘FFlipin’ Missfits’  were the leading team overnight with ‘The Bass Tards’ in second. ‘The Better guys’ were just a point behind in third.

Sunday was as perfect an Autumn day as could be wished for, with glorious sunshine and a perfect azure sky. The wind also consented to play its part, providing, if anything, rather more than the the forecast 3 mph southerly. ‘The Good Guys’ being the last placed team overnight, were somewhat dismayed when Steve Goacher failed to appear on Sunday morning, to take the place of Mr Average in their team, particularly with Mark Somerville failing to produce the form that saw him become RS Vareo national champion recently.

The fleet started on time with Simon Longstaff and Jon Denwood showing early pace and leading the fleet. Sadly the wind gradually evaporated and the Race Officer had no option but to shorten the course. Simon and Jon were unable to hold onto the lead and in the closing stages of the race, with the lake almost mirrored, John Hardisty and Terry Crumpton  both slipped past to take first and second respectively.

After a break for lunch had failed to provide any improvement in the conditions racing was abandoned for the day. The final finishing order was Terry and John first;
John and Dave second and Simon and Jon in third. The ‘FFlipin’ Missfits’ took the team prize with ‘The Better Guys’ in second place. 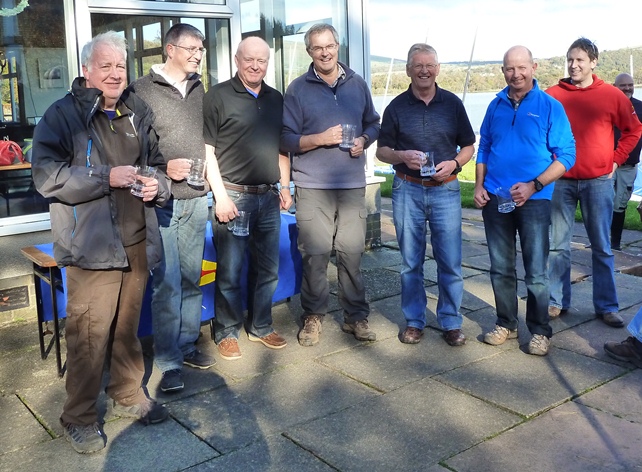 To reinforce the light nature of the competition in the F15 team racing, one of the key aspects of the prize giving is the Grotty Potty, re-awarded each year by the
previous year’s winner.

The major nominations for this year’s award all went to Bass members! Heading the list was Ian Preston for turning up totally unprepared in terms of organising the food. However, there were several people on hand, including visitors, to pick up the reins. On the grounds that Ian was not actually competing, his nomination was discarded. Next in line was our own National Champion whose lack lustre results could not even be put down to being late for the start! The winning nomination went to Neil Platt for leading most of the first race but only finishing 9th due to the vagaries of the weather, and having similar unexpected results in the following races.

It is clear that Neil has already decided next year’s winner will be John Hardisty. All he needs now is to dream up an appropriate mishap justify that decision. John is certain to oblige!

It was a light turnout for the final weekend series of the club championship.

With no other GPs racing on Saturday, Val/Ken raced in the handicap fleet, won both races on Saturday, and with the last race on Sunday being cancelled due to lack of wind, it meant they won the Comet Trophy! 2nd overall went to Alex/Olivia in an RS200 with a 1st and 2nd to count, while John/Janis took 3rd with a 2nd and 4th.

On Saturday, in the Toppers Harry was fully aware of the time to the start, counting down the time to his only competitor Jamie, but he was still more than 30 secs late for the start! As Jamie was the only boat to finish in either of the two Saturday races, and no Toppers sailed on Sunday, his solitary 1st position  won him the series Trophy!

On Sunday there were three GPs. Paul/Vicky led the fleet, with Val/Ken 2nd. With just one race sailed, the Stables Prize was awarded to Paul/Vicky.