Posted on 12 July, 2014 by Webmaster Posted in News, Racing, Socials

A weekend to ourselves, no visitors, no scheduled racing, just camping on site, team games, fun in Toppers, barbeque, and rain showers thrown in.

Here’s some pics of the rounders match (which went ahead on Tog’s new grass! – perhaps it’ll repair before Bass Week…), and the Topper challenge (a video will be prepared some time in the future).

Eazyest Gallery found no attachments to build a slideshow


Several bags of charcoal were more than enough to overcome the evening showers that threatened the barbeque – there were several sets of glowing (and singed?) knuckles shared between the generally male chefs before Claire’s bingo got underway, with some novel calling. Mark N took the prize first line, and Judith K the overall prize despite daughter Andrea making numerous iffy claims earlier…

Sunday started with some practicing of gate starts for the GP fleet before for the forthcoming Worlds. Shunty opted to show the way in the first start by skimming the transom of pathfinder Dave/Lynn only to narrowly avoid being wiped out by son Chris in the Gate boat! A couple of starts later and helms were more in tune with the procedure. In the afternoon a one-off race in memory of Pete Ballard, from which donations will be given to the Samaritans. The course took the fleet down to 14, which on the western side of the lake was slightly in the shade of Sale Fell and led to some wallowing, especially by Shunty/Ruth who lost a good lead while the asymmetrics planed to windward of them. Overall, it was the GPs that took the honours, led by Dave/Lynn, ahead of Bean/Alan in a F15, and then Val/Ken.

There was slight embarrassment when someone mistakenly sailed the Commodore’s boat believing it to be a club boat! Intriguingly Sazzle started in a Laser Radial and finished in a Topper – how did she do that?!

All in all a fantastic weekend with a difference. 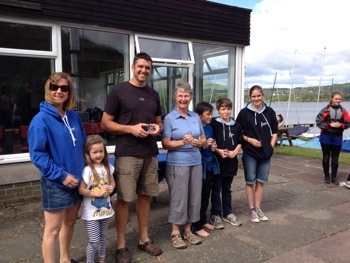 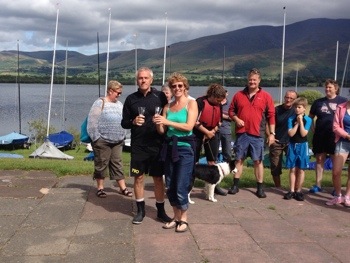 Mike/Kayla had been racing at Ullswater over the weekend and were delighted to beat Steve Goacher in one of the races! Steve has confirmed he will be taking part in the Flying 15 Northern championships which are being hosted at Bassenthwaite on 23/24 August. Book early and save £10