Posted on 27 September, 2014 by Webmaster Posted in Opens 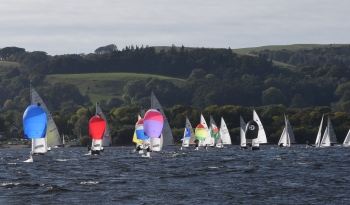 Great winds were forecast for the first day of racing with a fleet of 28 boats.

The wind was erring towards a southerly, which would mean some good long beats down the lake. However, a touch of westerly had the wind swinging around Sale Fell from time to time. This was apparent in the first race when the beat became a little one sided, and the OD starred to have kittens. However, there was some close racing, and Matt Thursfield secured his first win of the day.

After checking the southern end of the lake for a consistent breeze, it was decided to use that part of the lake for race 2. Racing started in a good southerly, but 10 mins in and it was no longer a steady wind… Holes appeared, major shifts, and much frustration. Just after shortening the course, the wind filled on the western side of the course which wasn’t where the leaders were, and Matt romped home with his second win.

The course area reverted to the northern bay for race 3 where there was a good westerly (and it wasn’t even a sea breeze!). The wind was swinging a little, but there was good close racing in excellent conditions. Bass’s Dave/Lynn Lawson took an early lead, built on it leg by leg, and held it to the finish.

With the forecast of lighter winds for Sunday, the OD continued with the quest to sail four races. The conditions held to get another good race in which, early on had Bass in the first three places. However, it wasn’t to last, but GP treasurer Paul Bowmer flew the flag for Bass and led the fleet at the finish. 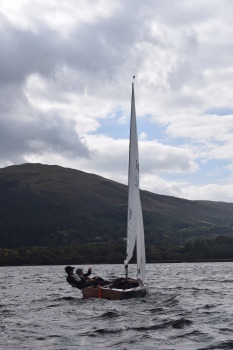 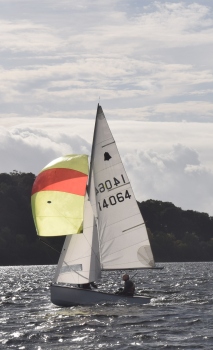 Overnight positions had Matt in the lead, with Paul, Dave and Commodore Andy Smith, all from Bass, taking the next three places.

With two further races to sail, what would Sunday’s weather bring? Answer – a better than expected southerly. Would the OD chance using the southern end of the lake again? Once bitten…

Despite the 10.30 start being a challenge for some to get to the line, there were three boats that had to be recalled for being over the line. As none returned, they only discovered they had erred as they crossed the finish line but without a hoot. The most unfortunate offender was Commodore Andy Smith who built up a strong lead, which he held all the way, scuppering his chances in the championship.

The final race was held in the northern bay as well. Dave/Lynn took the lead from the windward mark. Despite being challenged by Richard Instone, they stayed ahead, winning the race and the championship – a great bonus for Lynn’s birthday! The remaining contenders for the championship, Matt and Paul, were 3rd and 5th respectively finishing 2nd and 3rd overall, but in equal points. Obviously a close run, challenging championship that was enjoyed by all.

If you are missing a spinnaker or tiller extension, give us some identifying details and we’ll check if the ones found are yours! 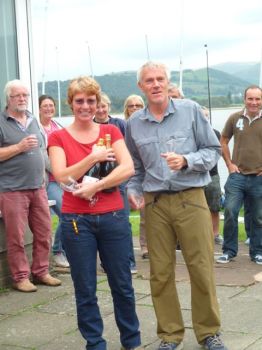