First day of Summer! Somewhat overcast, but the wind doth blow (a bit at least), from the forecast SW direction. The wind is due to pick up later in the afternoon, and give a good blast tomorrow!

The first race was all set for starting on time, until the final couple of minutes before the start when there was 60degree windshift that forced the OD to postpone and rethink. Although the wind continued to blow from the south at the southern end of the lake, the wind in the start area was from the E – NE. After a half hour delay a new course was set and the race got under.

Guess what! The wind picked up during the race with gusts of 25mph. Of course the wind swung back towards the south, so the spinnaker reaches were somewhat testing. Those that tried, more often than not, failed and ended up swimming. The gybe mark proved to be a tough test too, and there were several more capsizes. There were 11 finishers overall.

Races 2 and 3 were sailed back to back, and as the wind increased the numbers dwindled. There were 12 starters and finishers in race 2, and it was John Riley and Nigel Lewis from Bass that showed the way, with Hugh Godfrey and Rhonwen Bryce close on their tail. Perhaps lessons had been learnt from the first race as no-one chanced flying their spinnakers again! There were many white horses by the time the fleet finished, and some opted out of the final race leaving only 8 starters. The first gybe mark proved to be the downfall of several boats, including John Riley, but Hugh stayed upright and took the lead. With rescue boats failing, the committee boat went to the aid of one boat stuck in the mud, and with a small fleet that had numbers reducing there was a bit of a race to get to 0 ahead of the leading boat and shorten the course so that the fleet did not have to sail an additional beat! Hugh stayed ahead to take lead position overnight.

Will that be the final result as the forecast for Sunday is horrendus?

The forecast was right! The wind picked up as the morning went on so the OD opted to abandon for the day. There was an early prize giving and the remaining competitors were able to pack their boats up and get home early. 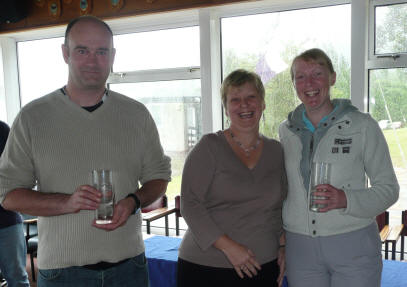