Posted on 27 August, 2007 by webmaster Posted in Racing

Due to a busy weekend camping the the mass of helicopters observing our activities over the lake were obliged to use nearby Armathwaite Hall – apologies for the inconvenience! This morning the long weekend seemed to be taking its toll with many people yawning their way to the changing rooms. Andy S came out (not literally, but from the changing rooms, somewhat overdressed I may add) in a dry suit which, it was suggested by his friends(?), was more fitting for his heydays in the GP.

As for the sailing, the winds were better than Sunday but still a little inconsistent in terms of wind strength. The occasional holes and twin wind directions meant sailors had their work cut out to maintain, or in several cases, regain positions and resulted in the handicap and GP series being decided on the last race. 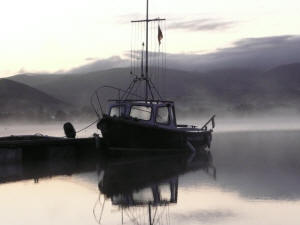 Quite a weekend – Southport boats capsize on purpose to experiment going turtle (somewhat difficult in our northern end) and was the salt out of their fittings. Bass boats capsize (no reason [or name] given), collide and cause some damage. Emma showed Sally the way around the course in her first ever race helming a topper (screaming continued to be the order of the day). Comments let slip about men wearing knickers. Barbeque lovers were not put off by the odd shower, or naked chef (or was that just a myth?). Also, there was the couple spotted leaving Derwent Lodge sometime after breakfast (in separate cars!). Silence started to rein in the webmaster’s presence (I wonder why?!)

With over 40 boats (+Southport visitors) racing, overall it proved to be an excellent weekend and the overcast weather encountered on Saturday seems to be just a distant memory…..