Posted on 7 June, 2014 by Webmaster Posted in Opens

29 boats across three fleets took to the water for three races in a one day open. The weather proved to be a very mixed bag ranging from bright and sunny to dull and drizzle/rain. Windwise, everytime the OD set a line, the wind swung drastically. After about half an hour of delays, the line was set, the wind again swung, but the OD opted to get racing underway despite the challenge of a running start in light airs. The wind continued to swing and many boats had to beat on each leg of the triangular course!

After the first race there was a lunch break and the  wind came in with fits and starts. It seemed that an earlier SE breeze was settling in, and race 2 got underway. It wasn’t long before the wind swung again with Sale Fell partially shadowing the course, and turning the beat into a fetch.

After yet another wind swing to the west, the last race race wasn’t looking promising when the wind faded for the Laser start, but it did freshen, settle in direction and resulted in the best sailing conditions of the event.

Although Henry and Jamie Rastrick from Ripon had a poor first race, they pulled it together and improved over the following races finishing with a net 3 pts, the same as David and Edward Coady from Derwent Reservoir. The tie was split in the Rastrick’s favour on the last race. 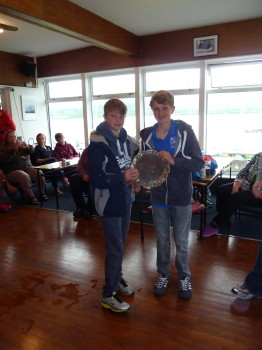 Henry and Jamie Rastrick from Ripon

Similarly, Tony Bamforth from Annandale improved his positions in each of the races finishing with an unbeatable net 3 pts. Tim Luke from Killington and our own Ethan Dawson battled it out for 2nd place, each finishing with a net 4 pts, the tie being split in Ethan’s favour on the last race. 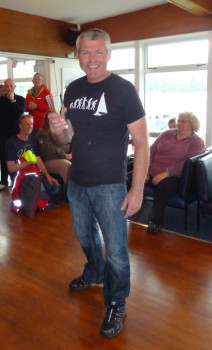 The Topper fleet was a good selection of Bass junior helms in which Harry Binns led the way (while the others seemed to do a lot of chatting as the sailed round) in the first two races to win overall. Jamie Kerr came 2nd overall with 3 pts, while David Rodger’s 2nd split a tie with Hazel Newport in his favour to finish 3rd and 4th respectively. 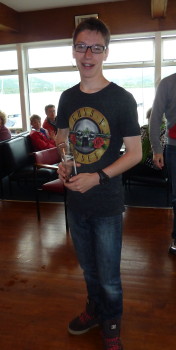 Sunday’s forecast was for more of the same, and the major windshift after the start of the morning race was certainly reminiscent of Saturday. The Asymmetric’s windward/leeward course almost became reach/reach as the wind curved round Sale Fell, while the handicap fleet had to make do with a couple of very one sided beats. Lulls in the wind lost vital seconds for Mike/Kayla who finished 2nd on handicap to Dave/Lynn. AJ panicked while he was doing well, forcing Val/Ken to keep clear by tacking off on a fetch! He then took the rounded the next mark the wrong way, losing much ground. In the Asymmetrics, Joan/Jack described the winds as being similar to going round the lake, but still beat Toggle on handicap.

The SW wind direction held throughout lunchtime and strengthened to give some great racing conditions, if somewhat shifty, and there were numerous capsizes. Fortunately there was no sign of the forecast rain showers, just glorious sunshine! AJ was struggling to find forward gear on the start line, but eventually got underway, then opting to retire early. Mike/Kayla had written down the course incorrectly, rounding 0 the wrong way, realised their mistake, and unwound only to be told by Toggle that the mark was to starboard, so they unwound again, and yet again when they watched Tog round 0 to port! Chris/Julie took full advantage of the pandemonium, but Mike would eventually take the lead again.

Toggle nosedived at one stage, and promptly capsized (what was he thinking of?!) Ethan found it a struggle to release the mainsheet to depower because as he leaned in, the boat tipped, eventually resulting in a quick capsize. In the Toppers, Izzie survived several capsizes before retiring, but Hazel sailed well and completed the course, having led all the way.