Posted on 5 May, 2013 by webmaster Posted in Championship, Racing

While the South seemed to be basking in bank holiday sunshine, Monday started overcast with light shifting winds in the bay, but with apparently steadier winds from the south, after a delayed start trying to find steadier winds, the OD opted to take the fleet down to mark 14. By the time the F15s started, the wind was settling from the SW, which meant there was a huddle of eager boats fighting for the starbaord end of the line for a reaching start. Three boats either mis-timed, or were forced over, the start and had to return.

The wind shift led to some flukey conditions down the lake, which various boats seem to revel in, while back in the bay the wind had steadied and there was some exciting reaches to enjoy before the final beat. Alastair tried some involuntary water skiing after being washed out of his boat in one of the downdraughts and then being towed behind it for a while!

Unfortunately one of the Catapults took the finish line the wrong way, and another three boats followed, though the others did redeem their mistake.

By lunchtime the sun was shining and the picnic benches were full! The wind held for the final race of the weekend. Having been over the line in the morning race, Simon/Jon were again premature starters in the afternoon along with Ian/Lezli-Ann. Although they restarted, they both later retired. Steve/Ruth were caught out by a gust at a gybe mark losing their lead big style.

With no other competitors in the Topper fleet, Ethan sailed in the handicap fleet, sailing brilliantly to finish ahead of Val in her Solo, and 5th on handicap in the race.

Despite their over eager starts, with three 1sts on Sunday, Simon/Jon still won the F15 Jak Pot ahead of Mike/Kayla. Scumper beat Steve/Ruth by 1 point to take the May Holiday Trophy, with Mark/Emma a couple of points behind in 3rd place. Ethan beat Jamie to take the Topper series, and Dave/Lynn beat Andy/Rob for the Lyne Tankard with Paul/Ken 3rd. 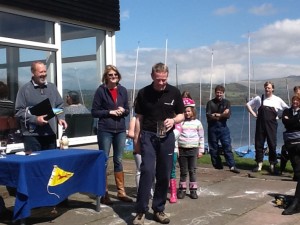 Sunday started damp, drizzly and breezy for the three races scheduled. There were many exciting reaches, made all the more hairy by squalls that also made the gybe marks somewhat challenging at times.

The rescue crews were kept busy keeping a careful watch on the numerous capsizes and broaches by boats in all fleets, including the Catapults. Also, it was a day for helms, and crews, falling out of boats, with Neil, Ian and Sally being but three of them!

Red spinnakers seemed to be the curse of the F15 fleet with both Lezli-Ann and Keith having major problems at times trying to unravel twists in the blustery conditions. Dave/Lynn’s binding at the head of their genoa became undone, but despite losing ground they managed to hold off Andy/Rob on the final beat.

The shadow of Sale Fell led to patches of light wind with un-nerving conditions as the downdraughts caused major powerful shifts, and capsized numerous boats.

While the sailors battled with the elements in the third race, the ladies had prepared an afternoon tea party with sufficient cakes to feed them for a week! Fortunately there were some morsels left when racing finished!

The evening finished with The Great Ribena 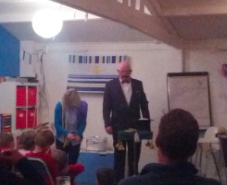 The Great Ribena sends his assistant to sleep!?

There was a good turnout of club boats, together with the visiting Catapults, for the May bank holiday.

Blustery conditions led to some exciting racing coupled with plenty of capsizes.

The Commodore made it on the water for his first race of the season, but struggled with a worn spinnaker halyard which slipped through the cleat on gusts. Good for depowering, but not for taking advantage of the gusts! He had some close racing with Dave/Lynn but managed to take the lead for the final beat. Instructors Mike/Nigel were again demonstrating their capsize technique alongside Alan/Sue who seemed to master it somewhat better!

Lady Emma, the Commodore’s wife, sailing in an Enterprise with Mark found the conditions challenging. Nothing to do with Scumper plying her with a drink or two the previous evening was it?

John Somerville made a guest appearance in Keith’s F15 and put up a good fight against Mike/Kayla, leading at times, but taking a crucial place from them on the finish line. Ian/Lezli-Ann also sailed well and managed to fight back a several times to win both races.

There was some consistent sailing in the handicap fleet with 1st, 2nd and 3rd places going to Steve/Ruth, Toggle and Banter in both races. Zefer was practising his capsize skills again.