Posted on 8 May, 2010 by webmaster Posted in Opens, Racing

There was again an abundance of wind for the Mirror, Laser and Handicap open meeting being held over the weekend. Although the forecast wind strength was perfectly sailable, there were numerous squalls passing through double the strength to about force 5. Pam Bath in her Mirror was the first boat to be caught out by the gusts.

A total of 19 boats entered, 11 Mirrors and the balance in the Handicap fleet.

The gusts continued throughout the afternoon, and there were a couple of casualties in each fleet in the first race – the most uncomfortable one being Jon Miller breaking a rib whilst crewing an Osprey! The stronger winds suited the doubled handers in the Mirrors with David Coady winning and Jack Lawson 2nd. 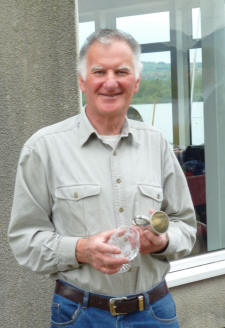 The visitors continued to dominate the results in the 2nd race which was won by Roy Platford, and David Coady 2nd, giving David the overnight lead.

Scumper and Zefer, took two wins in the Handicap fleet to take overnight lead. Toggle with a 2nd and 3rd was lying 2nd overall!

On Sunday, the wind strength varied almost as much as Saturday, albeit from a much lower baseline of practically nil! This has caused various frustrations, and fluctuations in position. Robbie D opted out after the first race, which Scumper which went on to win ahead of Mike Moore. The conditions favoured Stephen Kirkpatrick in his Vago in the 2nd race (or was it being in the right place at the right time?) and he took pole position ahead of Mike Moore (always the bridesmaid?…). The final outcome was a win for Scumper with Mike second.

Mike Fairlamb tried his hand at the helm of a Mirror again and secured three firsts, but it was Roy Platford from Wigan that won overall from Jack Lawson.