Posted on 8 July, 2007 by webmaster Posted in Opens

The high winds of the first race led to several casualties, including various team Bass boats (or was it all?!). In fact the strength of it caused Rob Smith to have a change of mind and he opted to crew for twin brother Tim instead of sailing single handed. The OD (and the twins brother) reckoned if they had a spinnaker system that worked they would have done wonders – such is life! Rob’s change of mind meant that Beanacrew, specially prepared for the weekend was left on the shore for (another) brother Andy to rescue (amidst various creaks and groans – was that Andy or the boat though?!) with the help of Scumper.

The wind did ease slightly for the other races, and there were no further casualties. Hector Cisneros with son Ben got in the groove and secured three firsts to have a comfortable overnight lead.

The OD was concerned at one stage that he couldn’t find the black flag on the committee boat, but as it turned out, all apart from one boat were well behaved and stayed clear of the line. In 5 hours the OD successfully had all four races completed, and boats ashore.

The sailors are all having an early meal followed by a sumo wrestling competition – no peace for the wicked!

The winds for Sunday were forecast to be relatively light – and how right it was. It proved to be a totally different kettle of fish.

The promised wind was very light to non existent. The OD eventually tried to start racing which resulted in a series of postponements, general recalls, round the ends and a black flag – well worth finding! All these starts used up what little wind there was so that when the fleet finally got under way the wind died totally at which point the OD abandoned the race –  or was it because Rob and Tim were last? You can’t have a Smith in last place! The abandonment brought cheers from the fleet that could be heard from the shore.

If it was possible, the wind died further with the lake becoming a mill pond. The OD gave up and abandoned the racing leaving the results as they stood from overnight. This scuppered Mik and Toddy’s cunning plan of getting everyone to pack up, whilst they waited for the sea breeze to come and get two good results.

At the prize giving, winning helm Hector Cisneros thanked the club for its hospitality, and the OD for some challenging courses, as well as abandoning the one race of the day that finally got under way. Also, he told the youths not to be dis-heartened by their performances on Saturday as it had been one of the most challenging days sailing that he’d had in years. 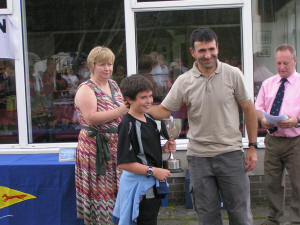 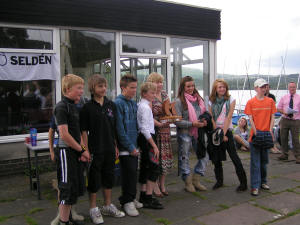 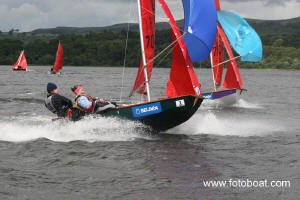 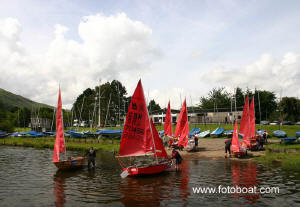 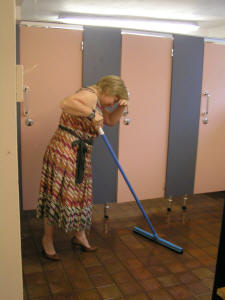