Night Jar Returns – Who was over the line? 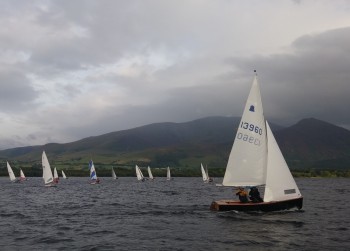 After a five week break the Night Jar restarted with Round 13. It was overcast with a constant force 4 southerly wind and some chop. The course was 7-3-1 giving a long beat, a good beam reach and a gybe mark leading to a close reach to the final mark.

There were 18 starters on a fairly short line and the GP of Val & Ken, going for the port end, was driven over and forced to return. Going from a fast leg into a tight gybe caused a few capsizes including the 200 of Toggle and Joan. At the end of lap 1 the two Joes – Watkins and Roberts – had pulled out a lead in their 300 and 100 respectively followed by the GPs. Joan & Jack had AJ & Sue close astern.

With lap times of 11 minutes and with rain threatening it was decided to finish the fleet after 3 circuits, the exceptions being Josh’s Tera and David’s Topper as they had been lapped.

On return to the Clubhouse and the meal prepared by Debbie and helpers, results were calculated. Joan & Jack took the win on FH from AJ & Sue with Joe Watkins third. Val & Ken had gradually worked themselves up the fleet to finish fourth ahead of Neil’s Radial.

On PH Hazel in a Radial took the win with Aj & Sue second closely followed by Izzie also in a Radial, it was great to see both girls sailing brilliantly in their Radials.

Over 50 helms have now contested one, or more, rounds in the Series and there are still three rounds to run.