Posted on 6 July, 2013 by webmaster Posted in Opens

Campers woke to glorious sunshine and a mirror like lake. Flurries of wind passed through but didn’t bed in until mid morning, which is just as well because there were over 60 boats in five fleets getting ready for five scheduled races – all in all a very busy day!

By the time racing was underway thee was a good force 3-4 which strengthened over the course of the day.

With so much activity it is difficult to pick out specific tales, but over the 25 starts there was only one boat over the line! A few people capsized, some were stuck in irons for a while, and some missed out marks, but they all had some great racing. 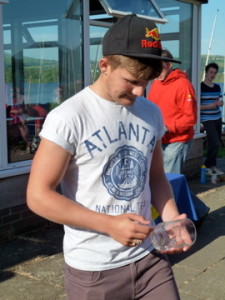 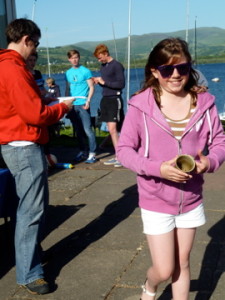 As forecast, Sunday’s winds were light and challenging. The first race was postponed until mid-day when light airs came in, and faded, from the North West, a cycle of change which was to continue throughout the day. Hopes of a sea breeze were dashed by early cloud cover, but at least the wind direction was relatively consistent throughout. Fortunately, conditions were good enough for both races to be sailed. Some close racing resulted in Nick Devereaux from Budworth winning the championship just one point below Haydn Griffiths and James Grummett. Ethan Dawson finished a creditable 10th overall out of a fleet of 33 boats. 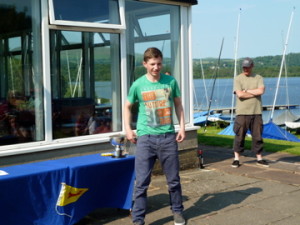