A brilliant finish to September and start of October is all due to a high pressure system, and a consequential lack of wind, which was not even strong enough to turn the nearby turbines, or blow away the mist which had been lingering all morning, so the likelihood of sailing was low. A small puff of wind caused ripples across the lake briefly, but they soon faded, and racing was abandoned for the day shortly afterwards. 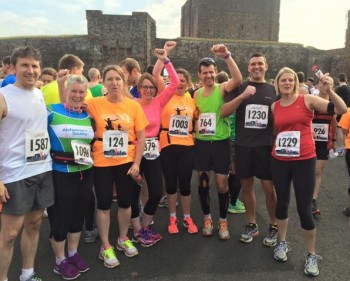 Sunday’s forecast was not a lot better, but it may have suited team Bass (comprising Commodore, rear commodore, bar chair, lady commodore, social secretary, youth squad co-ordinator and assistant, past social secretary) who are all took part in the Cumbrian Run!

On arrival at the club, sailors were pleasantly surprised by a light, southerly breeze, albeit somewhat cooler than recent days. Ten boats  sailed what was to be the first race in the October series. Banter in his RS100 led the fleet, and was lucky to take the wind around the course with him because shortly after the start of the first race wind from the SW enabled Sale Fell to cast a shadow on part of the course, but as he approached the shadow it was pushed away by the slightly stronger southerly. It was to be the GPs, led by Mike/Eric, that took all three pole positions, with Banter 4th on fleet handicap. Dave Lawson’s lower than usual position was due to offering some coaching to Pete Winfindale.

Though the wind strength varied throughout the day, it held for the afternoon race, but there were some major shifts to contend with which, of course, could prove to be beneficial if on the right side of the shift. Despite their best efforts, Joan/Jack were unable to stay ahead of Mike/Eric who went on to win the race on fleet handicap and take a 3 pt lead in the series. Joan leads the personal handicap series, with Banter 2nd.