Posted on 23 September, 2012 by webmaster Posted in Opens, Racing

After the vicissitudes of the preceding week, competitors were relieved to find that conditions were benign on the morning of the RS Open at Bassenthwaite SC. The sun shone; the sky was azure, and a pleasant F2 to 3 ruffled the waters with an inviting caress. The general consensus was, ‘Sorted!’

Unfortunately, through the course of the morning the breeze gradually evaporated. Just before the scheduled start time the breeze filled a little, and steadied, and the Race Officer elected to take the fleet afloat.

Ten boats set out to contest the RS Vareo Northern Championship, whilst the RS 200 Northern Tour event had nine entrants. The quality of both fleets was evidenced by the fact that each contained a National Champion. Mark Somerville from the home club is the recently crowned RS Vareo Champion, and Mike Saul and Meg Fletcher, from Yorkshire Dales are the reigning RS 500 Champions. 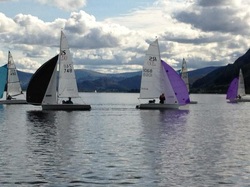 The conditions were frustrating and demanding in equal measure, both for the sailors and the Race Officer alike. When the leading Vareos reached into the windward mark with their kites flying, at the conclusion of the opening windward leg of the first race, the die had been cast. The Race Officer, proving that patience is a virtue, managed to get three races sailed in the most demanding of conditions. His timing was impeccable as the moment after the last boat had finished the last race, the wind completely evaporated and the lake mirrored.

In the Vareo fleet Mark Somerville showed his pedigree with three straight wins, but for the others consistency was to prove more elusive. Hugh Godfrey from the home club scored 6,2,3, to lie second overnight, with Mike Cowan, also from Bass, recording 3,8,2, to take third place. The first visitor was Andrew Cutting from Ullswater SC who managed a very creditable 2nd in the first race, only to fall to 6th and 9th in the next two.

In the 200 fleet it was a similar story. Overnight, Chris and Laura Pickles headed the leaderboard with a 4,1,1 score line, with Phil and Naomi Smith, from Bass, in second place with 2,2,3. Richard Whitley and Lucy Wade from Ripon were in 3rd place overall with a 1,4,4, scoreline.

On Sunday the forecast SE appeared on cue and the Race Officer took the fleets into the southerly end of the lake to take advantage of the stronger breeze. Conditions were radically different from the previous day, with the fresher breeze creating an appreciable chop running down the length of the lake. Despite a much stronger gradient breeze there were distinct holes which appeared from time to time leaving the unfortunate bobbing haplessly up and down – and going nowhere. Three races were sailed before lunch, the last in a suddenly building breeze which reached 20 or so knots on the final leeward leg, and was the cause of many capsizes.

Chris and Laura Pickles cemented their position at the front of the 200 fleet with three first places, whilst Keith Escritt and Anne Saul, also from Yorkshire Dales, prospered in the stronger breezes and moved up into second place overall, pushing Phil and Naomi Smith down into third.

In the Vareo fleet it was business as usual for Mark Somerville who cemented his overall position with two firsts and a second. A good battle was developing for the other podium places between Mike Cowan and Hugh Godfrey, with Mike coming out on top in each of the three races.

After lunch the wind had eased again and the final two races were sailed in similar conditions as had prevailed for most of the morning. Chris Pickles and Mark Somerville both sailed the first of them, ensuring victory, and then gracefully retired to let the others fight over the minor placings.

Keith Escritt and Anne Saul secured second place in the 200s with a 1st and a 3rd, with Phil and Naomi Smith finished 3rd and 4th to take third overall. Hugh Godfrey improving with every race, as he spent more time in the boat, reversed the fortunes of the morning and secured the runners up spot in the Vareo Fleet with a 2nd and a 1st, leaving Mike Cowan in a very respectable third place.