Posted on 19 September, 2008 by webmaster Posted in Opens

Bassenthwaite is today holding its first RS200 open meeting. It’s a glorious day, but only a light wind. There are 19 competitors.

The light and variable conditions made it difficult not only for the competitors  but the OD as well who had to change the line of the windward/leeward course for each race. This was not helped by the wind swinging around Sale Fell and giving two different winds for the beat in one of the races.

As ever, the best was saved till last in that the sea breeze came in and held to give good sailing conditions. The racing has been close at the front end of the fleet but Mike Saul and Meg Fletcher from Yorkshire Dales worked their way up the fleet a place per lap to win the final race and series overall 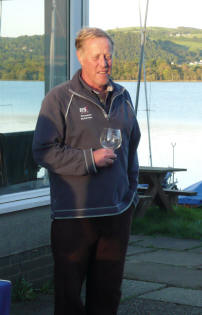 Club racing comprised a pursuit race and long championship series. In the pursuit race, the course was set to suit a southerly breeze but with the wind swinging around  Sale Fell there was a shadow hanging over the windward mark, and the S and SW winds tended to fight each other, giving little opportunity for the later starters to catch up. With the committee boat opting to take the easy option and sit on station for the finish there was some confusion by less experienced sailors as to how they should finish and in fact they never made it!

In the second race, the sea breeze came in and turned the main beat into a fetch

Notable moment of the day must go to Commodore Shunty who managed to capsize briefly at the windward mark – well that was bad enough, but after righting, the boat went over again and into the mud requiring a pull out of the mud by son Chris, and of course the odd shriek of laughter from wife Elaine as she and William passed Steve and Ruth