Posted on 5 April, 2014 by webmaster Posted in News 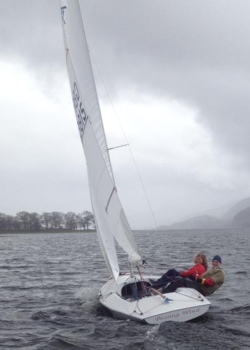 Ian/Lezli-Ann
(Surely they should watch where they are going!)
(C) Chris Hunt

Another southerly(ish) breeze, though the air temp was more like an easterly!

Various good gusts on occasions enabled some good planing reaches in the 1st race, but there was a desire to use some of the steadier winds down the lake in the following race. The downside of going down to 15 was that the OD opted to finish ashore thereby taking the course in the shade of Sale Fell with some shifts and occasional holes…

The Hardies had the best start in the GPs first race, and they used it to their advantage holding off Dave/Lynn for over half the race, but they were a close 2nd to Dave at the finish line. Running repairs impaired Joan’s start in the 2nd race, and Dave broke away with a substantial lead.

In the F15s Simon/Jon took to the water for the first time and led the fleet, as well as generating controversy by being involved in two protests in two races, both with Mike/Kayla. Old habits/sign of things to come?

Tog took the honours in his Vareo in the 1st race, with Robbie D/Banter 2nd in a RS400, but Robbie D won the next one with Mike F 2nd in his Streaker. 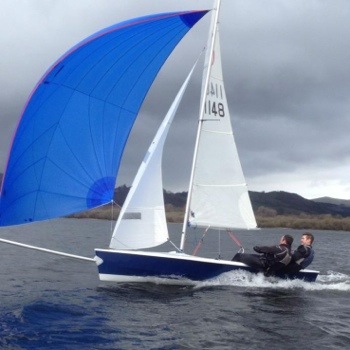 Sunday started dry with sunny spells that highlighted the white tops of the waves! Various squalls passed through from time to time that helped many opt not to sail. Two F15s did choose to start but AJ only sailed the first beat before retiring which left Mike/Kayla to sail one further lap before the OD took pity in them and shortened the course