Saturday started with some more junior sailing practice, followed by the final two races in the Asymmetric Cup and MJM series.

With a light SW breeze, a simple windward/leeward course was set (despite there being only one asymmetric boat sailing). All was well until the start of the second lap when there was a major shift to the NW which refused to swing back so the fleet enjoyed numerous points of sailing on a two leg course!

The start line was repositioned to suit the NW wind for the next race but started backing to the W even through the start sequence, such that some boats struggled to cross the line on starboard, and two GPs were caught OCS of which only AJ returned. A triangular course helped reintroduce a one sided beat into the course, but with the wind easing the race was kept short.

Steve/Ruth in a Merlin, and John in a Solo, shared the honours each getting a 1st and 2nd on handicap. Zefer in a Laser took 3rd in the final race to tie on points with Steve/Ruth, but counting two 1sts meant the tie was broken in Zefer’s favour. 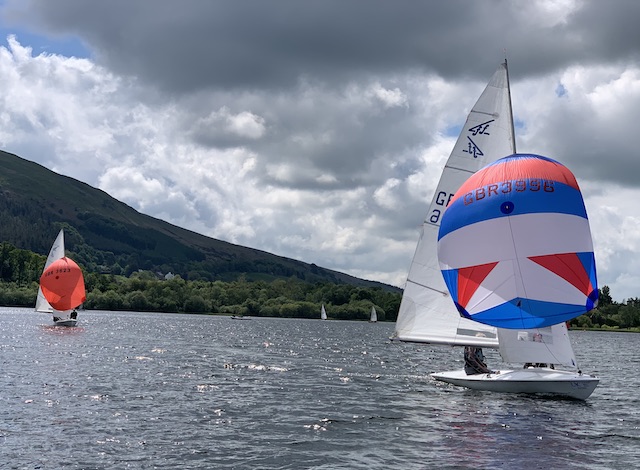 Sunday started overcast with a light SW breeze, though the shifts were not as drastic as Saturday. As the day went on the wind freshened, as well as warmed up, and the sun came out.

There was a capsize at a gybe mark in each race, and Steve’s main halyard gave way in the afternoon race leading to his retirement, but not much else of note. Mike/Kayla won both F15 races ahead of Angus/Mike. There was only one race for the GPs which was won by Joan/Jack with AJ/Sue 2nd. Steve won the morning Handicap race from newly married Rich Critchley in a Solo, with Stan in a Solo taking 1st place fromPaul in a Laser in the afternoon race.

Next Saturday we are hosting PTBO which is an RYA inspired event to promote sailing and sailing clubs. We need volunteers to make this event a success. Huge thanks to those of you already signed up to help. Lots of people staying very quiet but don’t be afraid to lend a hand. The club runs on volunteers’ efforts.