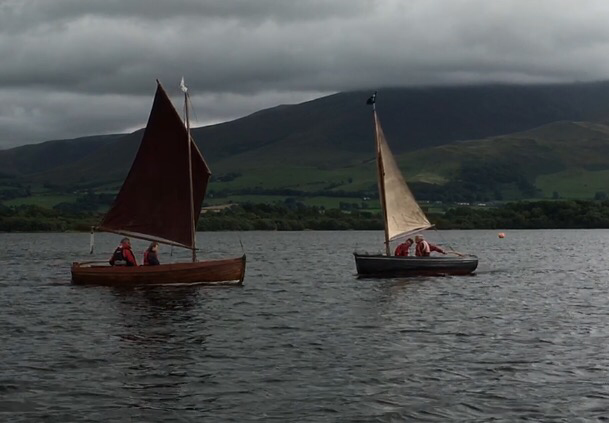 As many will know the trailer for the new Film based on Arthur Ransome’s book, was shown to a selected audience at the Theatre by the Lake in Keswick some two weeks ago. We look forward to the national release of the film to the public on 19th August.

But one of our members had been instrumental in refurbishing the boats used in the film and was charged with their safe keeping prior to pre-release publicity at the Cowes Regatta. There would be one day before the boats departed from Cumbria for the South Coast so he arranged to display them at Bass Week. But the logistics were challenging: to bring two boats from South Cumbria, rig them, display them and return them would be difficult. Nevertheless, that is what occurred.

Swallow & Amazon were rigged for viewing by early afternoon on Thursday.

Hence Swallow was launched with Katia Smith  (aka Tatty Walker) aboard and likewise Amazon with Hazel Newport  (aka Peggy Blackett) as crew. The helms were Peter and David Lawson.

Inevitably a short race was arranged between the two Boats. Swallow won which, as readers of Ransome’s series of books will know, was an appropriate ending.