Posted on 7 September, 2013 by webmaster Posted in Racing

As sailors arrived, the forecast of strong, gusty SE winds was accurate, and there was an air of reluctance to venture out – even Ethan said he would be waiting for the wind to moderate!

The visiting Tinkers had an earlier start, and wanted a tight course that avoided the main swell in the bay. That meant they would be in the shade of Sale Fell… It did, of course, have its effect and there was about of wallowing as the boats tried to round 9

By the time club racing started, the wind had eased, but started to swing around Sale Fell too. Despite best attempts to maintain a beat by moving marks, the wind continued to swing. Repositioning 8 caused Eric/Kayla to head for the wrong mark after rounding it. By the time he realised, he was heading so low that he had to drop his spinnaker and beat back up to 5. Not only that, he ran aground!

Jim C was on the wrong side of one shift, causing him to be last to the windward mark behind Ethan.

It seems that luck was on Jim’s side, as he did manage to get the lead and win on handicap.

Sunday’s weather was much more settled – still a good breeze, and a bit shifty, but the sun shone too!

Jim didn’t need good luck this time – he sailed well, kept well ahead of Joan/Jack who were still getting used to their new GP, and he won both races to take the Tinker Trophy with a clean sweep of four races

In the Tinker open, after five races of straightforward triangular courses, the OD set a figure of eight course for the final race. Malcolm Ellwood led, but sailed the course as a triangle and his lead, together with the overall trophy, went to that regular winner at Bass, David Warren 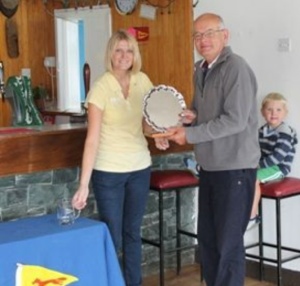