Posted on 13 September, 2014 by Webmaster Posted in Racing 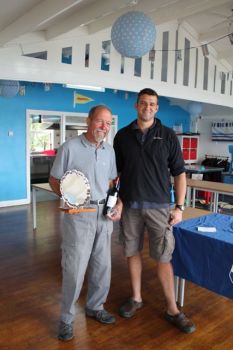 With the onset of the Southport 24 hour race, we have pulled together a team of willing volunteers to race in this prestigious event for the first time in several years and, for the first time, we are racing an Enterprise! Good luck to all the team, especially as the race started with a lack of wind.

Back at Bass, there was a similar lack of wind for the visiting Tinkers first race, though it did fill in from the East to keep everyone moving for the rest of the afternoon. The Tinkers had a fleet of 10 boats this year, and completed six races over the weekend. Unusually, for Bass, there was a new leader and overall winner this year, Malcolm (sorry, don’t know his surname), who was presented with his trophy by Vice-Commodore Mark Somerville.

Club racing comprised the Tinker Trophy but, with many away at Southport, there was a low turnout (much to AJ’s delight). AJ led the first race but had to make do with playing second fiddle to Jim in the 2nd race, while Nigel always stayed close to the mix (except when his out haul came undone!). Sazzle had a keen start in the first race, but misunderstanding the oh so helpful advice from many ventured even further into the race area before the start. Consequently she was recalled as the rest of the fleet sailed on. All part of the learning curve. Kayla kindly nurtured Josh around the course for his first ever race in a Topper, and he promptly beat her! Well done.

As expected, Sunday had stronger winds, well at times! The problem was that the wind was swinging around Skiddaw offering either an Easterly or South Easterly. Each of these directions cast shadows on the course area causing some drifting conditions. Although there was a better turnout, and Neil/Rory led the way beating John/Nigel by more than 1 min on handicap, the competition for the trophy would remain with Saturday’s main contenders – AJ and Jim, who was overnight leader with two 1sts. Jim was sailing with grand-daughter Poppy and they convinced themselves that, having beaten AJ in the morning, their position was unassailable so opted not to race the final race.

There was a couple of premature starters in the 2nd race, one of which was Neil/Rory, but the wind dropped so it was a slow process for them to return. There seemed to be great confusion as to whether there was an individual or general recall as several tried to drift back to the start line. Some 4 mins later, Neil had cleared the line again, and the wind started to fill in to take the fleet down to 15. The first boat to come back into view from the clubhouse on their return leg was that of Neil/Rory having built up a 6 min lead on the next boat of Tim/Ian which was sufficient to give them their second win of the day, and secure Jim/Poppy’s winning position in the series.

The finish was not without its moments when several boats opted, for no apparent reason, to cross the finish line from the wrong side, so they delayed their finish until they finished correctly!