It might be cooler but there’s still plenty of sun, and a lack of wind…

While team Bass are competing at Southport in the 50th 24 hour race, 11 Tinkers are visiting the club this weekend and held three races in light conditions, while three club boats competed for the Tinker Trophy in variable winds which kept them moving at worst. Joan and Jack in a GP got away well in the first race, taking first place with Jim in his Supernova 2nd, but the order was reversed in the next race.

Fortunately the wind returned on Sunday, and although the cloud was blown in too, the rain held off until after racing. A fleet of ten boats made for better racing, but it was Joan/Jack and Jim that mastered the conditions. Jim was all prepared for Poppy crewing and sailed the Hartley in the morning but, as she had slept in, he didn’t sail to full speed taking 3rd to Joan’s 1st. So it was all down to the last race in which Jim returned to his Supernova taking another win and the Tinker Trophy, with Joan 2nd.

Despite capsizing in the morning, Paul Gannon finished a creditable 3rd overall in the series. Banter sailed with Oscar in their recent addition to the Mirror fleet, and were first to finish (albeit having sailed one lap less than the rest of the fleet). 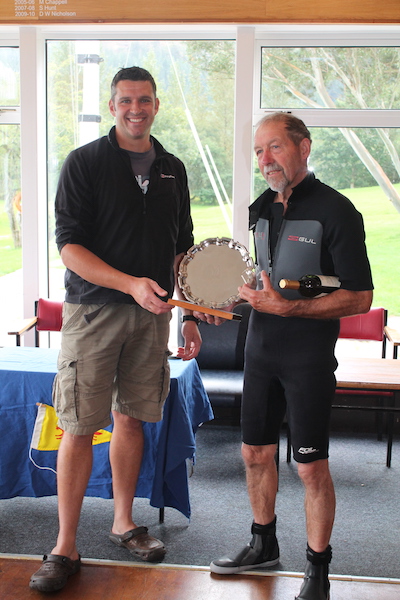 The Tinkers had another enjoyable rally, with a meal in the clubhouse on Saturday, and a cake sale in aid of MacMillan Nurses raised £116. The winner after six races was Malcolm Ellwood pictured receiving his trophy from Commodore Mark Somerville.

As for the 24 hour race, our team came a creditable 25th overall after suffering an early penalty which pushed them down into the 50s from 6th position. Well done to everyone involved.