After a cloudy morning, the clouds started to part, the heat of the sun was felt, which was useful to combat the cooler than recent breeze, from a more typical SW. Indeed many were pleasantly surprised by the strength of the breeze that led to a few capsizes, and some good planing conditions.

Ian/LezliAnn took an early lead in the F15s in both races, but their downfall in the first race was rounding a windward mark the wrong way, which Neil/Rory took advantage of, and held 1st position through to the finish. In the second race, Neil sailed a better beat to take the lead through to the finish, though Ian remained on his tail throughout.

Robbie D/Banter in their 400, and Scumper in his 100, were the main contenders in the fast handicap fleet. Despite having the slower boat of the two, Scumper had some close battles with Robin, taking water at one mark (whether he had it or not!), only to get his comeuppance when he capsized, and struggled to right it as nimbly as he did the Vareo.

No particular changes of position in the slow handicap fleet, with Jim leading the fleet in his Hartley, followed by John in his Pico, and Mik back on the water in his Mirror.

Sunday started with the wind blowing down the eastern edge of the lake as Sale Fell shadowed the western edge. By the time racing started the wind had backed a little to the south so that OD Neil Garrison could get a beat from 1 to 8 and then zig zag the fleet back downwind again. The various gybe marks were the downfall of several helms in the stronger winds, one being Joan/Jack leaving Val/Ken to continue to the finish to take a 1st place in the GPs. The same happened in the next race, resulting in Val winning the McMillan Cup.

Neil had a fresh crew in the F15s, and the strengthening conditions suited him and Nick, securing another two 1sts with a good lead to win the Ullock Mug and let him finish early to go and watch the tennis!

With no racing in the slow handicap fleet, John Roberts results on Saturday earned him the Round Table Trophy with Mik finishing 2nd, and too shattered to race on Sunday!

With overall positions being very close, the cream of the fast handicap fleet battled it out to the end and were suitably shattered after the 5th race. It was Robbie D/Banter that secured the trophy from Scumper with Alex/Olivia 3rd. 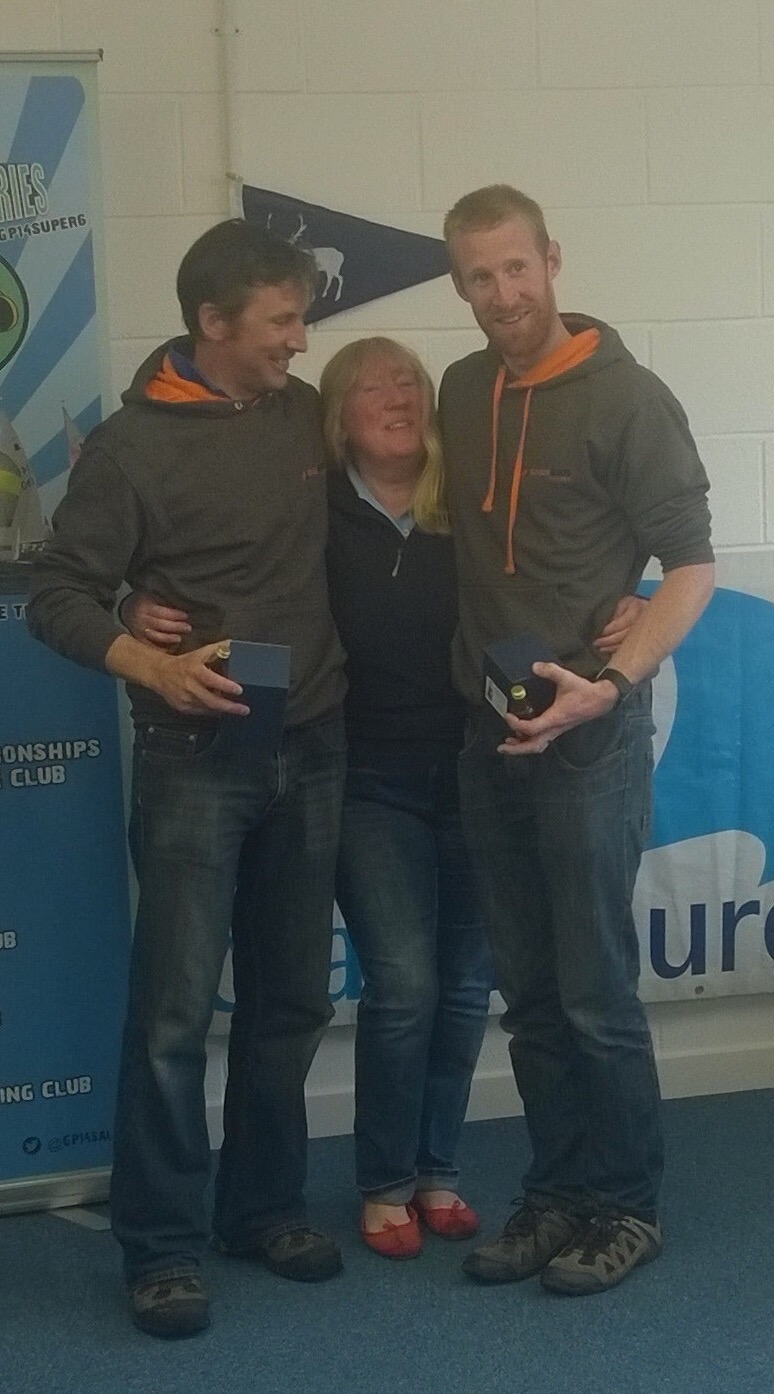 Congratulations go to Andy Smith and Phil Hodgkins on winning the GP14 Scottish Championship at Arran this weekend.

Duncan and Peter were 2nd, Mike and Eric 4th, and Alan and Sue 7th