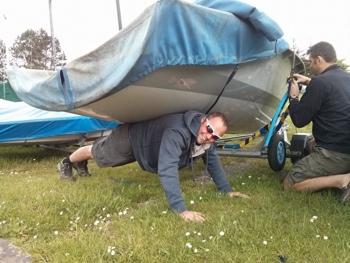 Mixed weather from sunshine through rain seems to be the order of the day, and the wind almost as variable!

Half a dozen Toppers initially led the way in Celebrity Glass Pursuit, though Dave/Lynn were the next to take the lead, Robbie Dee/Banter took advantage of the freshening winds to work their way from starting last through to the lead and winner’s horn.

The 2nd race was part of a long championship series. In the F15s Mike/Kayla took the honours with Wendy/John putting in a good performance in the blustery conditions finishing 2nd just ahead of newcomer Angus Corry.

In the Handicap fleet Robbie D/Banter secured their 2nd win of the day; Tog took 2nd in his Vareo with Mark/Emma 3rd in their Enterprise. 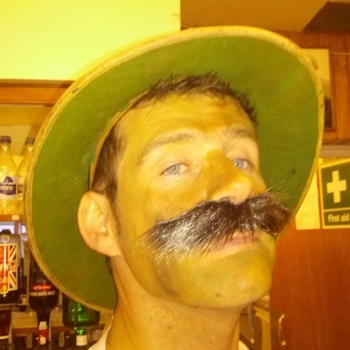 More mixed weather for Sunday – starting bright and warm with little breeze. The wind did pick up a little from the South, but as soon as the OD set a startline and course, it swung to the West, so a new line and course were set, but the wind had eased a little. Ian/Lezli-Ann took an early unassailable lead, and managed to keep track of where they were on the Olympic style course, taking the winning horn ahead of Mike/Kayla.

AJ/Sue mastered the start squeezing Dave/Lynn and Mike/Eric out of the start giving themselves a 30 sec advantage, but it was Joan/Jack that were in the lead at the windward mark and had to fend off Paul/Vicky through to the finish.

Scumper/Zefer had a flying start in their RS400 but the light conditions were more suited to Robbie D/Erin who won on handicap in a RS200.

The wind faded over lunchtime and didn’t return, so racing was eventually abandoned for the day.

More WW1 centenary celebrations were the order of the night. What goes on at Bass stays at Bass (usually!)

Bank Holiday Monday and the rain that the rest of the country seemed to be whinging about had passed through overnight leaving a bright morning with a good Southerly breeze breaking many white horses across the lake.

Two races were sailed before lunch as dark clouds moved in and the wind eased slightly. A criss crossing course meant it was important for sailors to stay alert. One incident had Robbie D taking avoiding action to miss Ethan, and he subsequently had to do turns, that cost him several secs and the race which was won by Tog with Bean 2nd. Tog proved he hadn’t just taken advantage of the situation by winning all three races and the Isel Cup. Robbie D and Scumper ended up on equal points but Robin’s 1st gave him the advantage and 2nd overall.

In the F15s, each race was won by a different helm, Andy/Ian and Mike/Kayla finishing with 8 pts each with the tie for the Mellor Mug split on the last race in Andy’s favour.

A wind shift, meant a starboard biased start line, and some over eager starting in the GPs. With four boats over, and only two boats returning, and all four races to count, Dave and Mike had scuppered their chances in the series, so Joan/Jack won the Commodore’s Prize with Dave 2nd on equal points with Val

Mik had a clean sweep to win the Orsova Cup, with Hazel putting in some consistent sailing to finish 2nd overall.