Blue skies, rainfree, but windy weather was the order of the day for the start of this weekend’s Fleet Challenge which is being run on a pursuit basis.

Altohugh the tops of the waves were not obvious when looking down the wind this week, only five helms put their names down to enter and obtain start times, of which only two decided to start in the first race, namely AJ/Sue and Mike/Kayla, both sailing in F15s.

AJ started first, though not taking full advantage of his 4 min head start, and he held he lead for 3/4 of the race despite not flying a spinnaker.

Dave/Mike F noted the winds had eased slightly and sailed the 2nd race starting 1 min ahead of AJ and 5 min head of Mike. Mike again passed AJ by making good use of the spinnaker legs, but then had to chase Dave. However, various broaches slowed him down and he was unable to catch Dave within the allotted 50 mins.

On Sunday the weather must have seemed more sailable as there were 8 starters in the morning race, though once on the water the wind freshened slightly, and there were some capsizes even before the start. Mike/Eric started first and held their lead for the first half of the race.

Andy/Phil had the sharpest start of all, with Dave/Lynn closely behind. Andy did break through to the lead but a problem with the spinnaker halyard caused him to drop back a couple of places from which he never fully recovered.

Banter found the conditions challenging in his RS100, and his numerous capsizes tiring, but he was glad to have been out!

In the final 10 mins (or so) of the race Mike/Kayla took the lead, and the winning position with Dave/Lynn 2nd

Another two races were scheduled for after the lunch break. Andy/Phil had more gear failure and retired just before the start. Dave/Lynn capsized on the first spinnaker leg leaving Mike/Eric to lead the way in their GP. The heavy conditions suited the F15s and they took the first three positions half way through the race, which left Steve/Ruth and Scumper/Banter chasing the pack for pole position. As the Bates headed out to shorten the course, mark 0 became tangled in its prop so the race was shortened in an unconventional manner slightly ahead of schedule! Fortunately the sailors were tired enough to be happy to accept the result and bring the series to an early conclusion as they were generally too shattered to sail the 5th race.

With a slight break in the wet weather, work has begun on regrading the back camping field to improve run off and reduce the risk of flooding during Bass Week 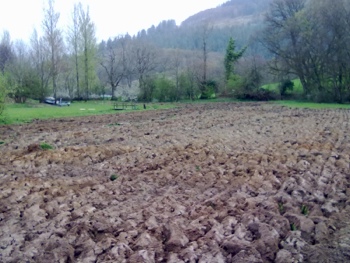 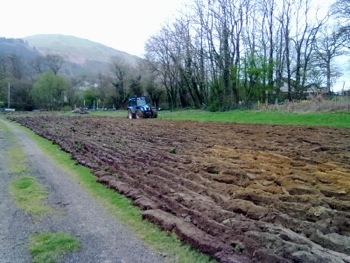